Fire in The Hold

Ten km’s (6 miles) from FOB (Forward Operating Base) Now Zad lays the village of Dahaneh. To get there you must enter thru what is know as Devil’s Pass, according to the Marines of Golf Company, Alexander the Great, the British of a 100 years ago and the Russian’s thirty years ago had been defeated trying to enter the “Devil’s Pass”.

However we did not have the heart to tell them that despite exhaustive research, there has been no record of any of the above armies ever mentioning “Devils Pass”.

The objective of the mission was to enter and control the village of Dahaneh, where no form of Government or law had existed for years and was in affect in the control of the Taliban. Secure the village, eliminate the Taliban threat and enable free and fair elections to take place. Given that the good residents of Dahaneh have never voted before in history and have probably never felt the need too. The village Shura and Jirga system had served them well for centuries, only the Taliban were causing problems for the locals.

Thus the powers to be that run this war decided that Dahaneh was a critical lynch pin in the “Surge” and close to 500 US Marines and 20 or so ANA (Afghan National Army) were to establish democracy, law and order, build an Outpost, win hearts and minds and kill as many Taliban as possible all in time for the Election.

The mission was already running late before we had even started, the reason was that the ANA were running late and were not ready. Under a waning moon Greg Palkot and I stood and waited frustrated by the fact that we were assigned to the last vehicle in convoy, a 7 ton truck that was also carrying the ANA. Which given there track record meant that the chances of us seeing kinetic action and the assault were greatly diminished?

If I heard one more cliché speech that included lines like “ A watershed moment or a critical point in time” I would of vomited. Standing in the dark a Marine to hide his nerves stood on a truck and sang Neil Diamond songs as if he were auditioning American Idol.

Eventually the ANA came to the Convey rendezvous point with about as much interest for this mission as one has going for a root canal treatment at the dentist. In the event of trouble or actually running into Taliban I had no doubt that these troops would have been totally ineffective and more of a danger to us than the Taliban.

With the Commanders stretcher safely on the truck and a box of RPG’s to clog the benches so that they could not get out the convoy, we began the very slow and painful trip to Devils Pass.

The frustration of being at the back of a convey for a cameraman trying to cover war is dreadful, as I commented to Greg as we approached we might as well be doing radio for what I could see thru the lens.

Dawn broke as we entered the pass and the sound of gunfire suddenly increased dramatically, there was a lot going down as the first Marines had gone in by chopper under darkness and where coming under stiff resistance. With each 100 yards closer to the village the sound of gunfire reverberated around the truck, at least one good thing was that the ANA never bought their weapons up into any offensive posture and the risk for us of being accidentally shot was negated.

As we entered the village outskirts it became apparent that things were spinning wildly and the Taliban resistance was stronger than originally anticipated and waves of gunfire swept around us from the mountains. 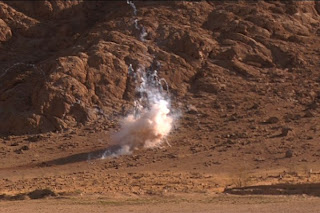 Villagers were seen fleeing from compounds as more bullets cracked from heavy guns and recoilless rifles. A RPG went screaming between two Marine MRAP’s and exploded on the hill behind us. The compound of the base of operations that the Marines had set up in was under serious attack and from a hundred yards away I stood in the back of the 7-ton truck and filmed Marines ducking and running as the Taliban bullets kicked up dust around their feet. 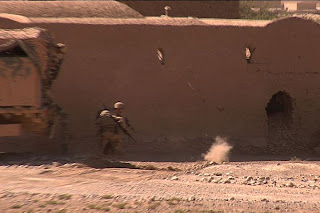 The worst thing is that you realize in a few minutes we would both be having to do the run ourselves from truck to compound, not a happy thought as I could see from my viewfinder what was going down.

On the rooftop a line of Marines could be seen and the noise from the gunfire echoed around the valley and village. I needed to get there and get the action as soon as possible, the smell of cordite is a lure to a cameraman that is hard to avoid. And knowing that it is safer to be at the front rather than stuck in a truck exposed also weighed on my mind.

When it came time to disembark, my mind switched off from the scenes I had been filming minutes before and it was a fast crouching weaving run across the 30 yards to the sanctuary of the compound.

“Where is the rooftop?” was my first question panting and dripping from sweat. Greg was to get the equipment into the compound I was to get to the roof and start filming. Climbing thru a hole blown between compound walls I raced thru the building and up onto the roof. 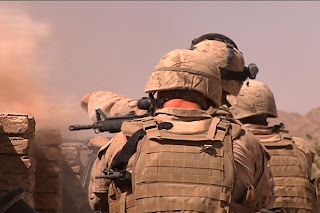 8 Marines were stationed behind a three-foot wall on the roof; the floor of the roof was littered with spent ammunition. And every few seconds another volley was spewed into the village. Keeping low I dashed across the roof to the wall and took cover next to the Marines. Bathed in sweat and dirt they looked happy this was the action that every one of them craved.

One Marine stood up with binoculars exposed and started calling directions for fire, at that moment a Taliban bullet hit the wall inches from him and flew up, missing him by inches. Another volley from there machine guns bought a few minutes of silence from the Taliban.

And so for the next hour or so it was volley, counter volley. I crawled up and down the line trying to anticipate the salvo. Greg joined me on the roof next to the wall; keeping low we filmed a couple of on cameras and talked with the Marines as they improvised ways of trying to keep their ammunition out of the dirt. 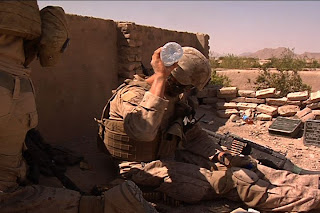 By now the sun was a furnace above us, and Marines poured water down there backs trying to keep cool, none of them wanted to be relieved as this was were the action was going down. I realized that soon Greg and I would start getting heatstroke if we did not get off the roof soon and crouching low we ran to the stairwell and down.

It was now past noon and I needed to get the footage to New York, the incredible thing is that with todays technology we carry a small satellite dish about the size of a briefcase that gives us a direct uplink and hooked up to a computer, I can edit, compress and send the files direct to New York.

The room we found in the compound had been stormed earlier and the dirt floor was covered in broken glass, window frames hang loosely, old rags and a frayed piece of rug were the only things in the room. And old tin box became my workspace out of the wreckage that existed.

First footage sent in and a live shot from the safety of the garden outside, every few minutes another volley of gunfire echoed around, to a bizarre extent you can become immune to the noise, as if it were just the norm.

The next phase for us was to edit a feature length piece for the Evening Primetime broadcast, and sitting in the shell of the room we were piecing together a spot, when all of a sudden there was a loud scream around the compound.

“Fire in the Hold”

What the f…! . Every single person suddenly ducks down into a fetal position and puts their fingers in their ears. You close your eyes not sure of what are about to happen.

A explosion blasts thru every single nerve in your body, it shakes every organ and the room simply disappeared in a barrage of dirt, dust, rubble and even pieces of window frame exploded and shattered around us. The computer was blown almost to the ground and the dish outside was now in a new position.

A wall had been blasted to allow more movement round the compound.

Picking ourselves back up Greg took a photo of the aftermath. 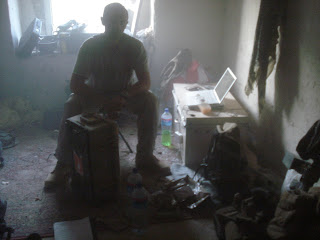 You cannot dwell on what has happened, the explosion had blown the computer around so much that I lost half the work I had done and had to start again. Brushing the debris off it. I started again. Five minutes later…

“Fire in the Hold,” screamed from room to room. Grasping a bit of rag I covered what I could in the few seconds. Computer on the ground this time. Running for the door we ducked down and covering our ears waited for the explosion again.

The building shook around us as dirt and dust once again engulfed us. Like Pig Pen from a Peanuts cartoon we stood up and looked back into our room half expecting that everything would have been destroyed.

But as the dust cleared the computer and camera gear came into sight, looking the worse for wear yet still working. Daylight was fading fast and I told Greg “ Forget the next live shot to New York”, we were basically trying to stay alive.

With no power the computer and little satellite transmitter were running on battery and it was a race against time. As I started the file transfer to New York the computer low battery warning came on, as did the satellite battery. It was a race against time and as darkness fell the story made it to New York, and a minute later the sat dish went dead.

As we lay down amongst the rubble and broken glass for the night, drinking a hot bottle of water, the gunfire continued from the roof above us. Exhaustion swept over us and in clothes crusted with salt from sweat I slipped into a sleep on the floor. Sharing the space with a company of young Marines we all had just enough room to stretch out. 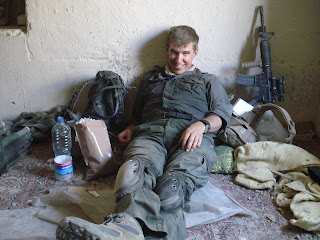 Dawn was a few hours away and for a few brief hours we both slept. Tomorrow we knew was when we would begin foot patrols around the village to clear out the Taliban compound by compound.