I had been given a gift a year and a half ago. I knew at the time it was a gift, but did not begin to comprehend just how much of a gift those memories and reflections continue to be. These are my first few days back from a two week break from anything News or News Gathering. And boy, wouldn’t you know, the soul needed that break.

Vancouver Island was the place that I would go to recharge the mental batteries and free the spirit. The drive to my final destination of rest and relaxation would spawn images and memories of this wonderful gift.

It first hit me as I am listening to some 80’s hair band over the satellite radio, not thinking of anything in particular, when all of a sudden the place around me looks strangely familiar. I am on route 4, passing  through a very small village called Hilliers. It was at this rather rural place, which I had never heard of before, where the true meaning and spirit of what this “gift” was, beginning to take shape. And just like that I am transported back in time. Thoughts of me in the back of a modified Camper known as “Media One”, my lens pointing out the back, toward a happy young man, his arm out stretched, holding the Olympic Torch as it passed through this small, yet excited, little community of Hilliers BC. It made me smile and think of just how lucky I was to be there at that moment in time, to bare witness to the beginnings of a Nation about to become a glow in the celebratory light of the Olympic Flame. 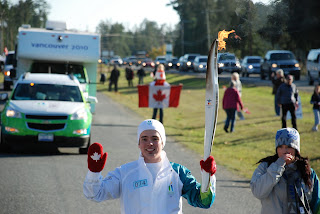