Flyin’ With the Kids

Every day is a new adventure in the world of journalism.

Today, a seemingly benign story about a youth group expanding its horizons turned into a grander adventure than intended. The idea behind the program was to take 100+ kids out of their neighborhoods and show them new possibilities for their future. In this case, they were featuring the exciting world of aviation. And, as an added bonus, five winners of an essay contest were gonna get to fly in a plane! Nice and easy feel good story.

Now, I’ve been on some wild rides in the past… a stunt plane in an air show, an Air Force refueling plane, fire fighting helicopters… so a little cruise in a small plane seemed like an enjoyable afternoon.

So I saddled up with a pilot an an 11 year old kid from the “inner city”, and we took flight. Once we were up a few thousand feet, the pilot let the 11 year old take the controls… and suddenly this whole story didn’t seem like such a good idea. 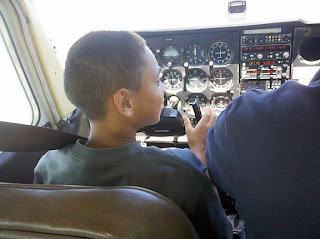 Like any kid would, he took the controls and pushed forward a little harder than was necessary, directing the plane more and more towards the ground. He jerked it left, jerked it right, and by the time the pilot took control again I began to seriously question my decision to stow away on this flight. The Burger King I grabbed on the way over wasn’t sitting too pretty either. 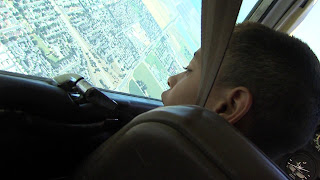 But I kept reminding myself that a trained professional was still in charge, and of course we landed safely. But golly, for a few seconds there I was wondering if this was going to be the end of my wildly successful (by some standards?) career as a journalist.

From now on, I’ll just stick to jumping out of planes. Seriously, it is a little less frightening than having your fate at the hands of a pre-teen pilot.

And the kicker? When we landed I asked him what he thought of his day. His response: “I wonder if they will let me sit in that Lamborghini over there!” You just flew a plane!! Kids these days…