If the image is shocking to watch on a TV News bulletin, image being in the hospital room and having to physically experience the pain, suffering and anguish of the victim.

9-year-old Faraz Abu Shaba is staring at the lens and his face fills the frame, it is a haunting image of a young boy suffering 2nd degree burns; every feature is burnt and discolored. Every few seconds his expression changes and is contorted with pain. His head is listless and his eyes are elsewhere. 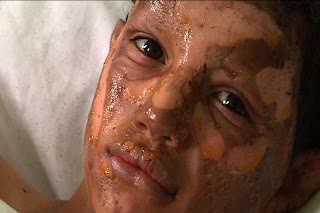 You have to distance yourself and somehow the lens becomes a shield that helps break the reality of where you find yourself.

His father lay in a bed next to him, eyes in a catatonic stare to nowhere. And again I filled the frame so that only his eyes gave the window to his soul and despair.

It is the first hospital we are to visit on this day.

Farazs’ older brother Ibrahim is dead, cut in half by ball bearings that had been packed in a grad rocket and fired into Misrata from Gadaffi’s forces outside the city. He had been standing at the sink outside the kitchen of his modest house in the Eastern section of the city, when the rocket landed less than 10 meters away. A steel propane tank in the yard is full of holes, from the ball bearings; Ibrahim did not stand a chance as he washed to get ready for evening prayers.

Relatives show us a passport photo of Ibrahim as a 9 year old; he looked almost angelic in that photo.

Shrapnel razor sharp is gathered and displayed on the base of what remains a wall, so that everyone who visits can examine the evidence of another war atrocity.

From the roof of our hotel in the centre of the city, we can hear and see these rockets coming in. You become accustomed to the sound of war in a weird and disjointed way. In Misrata there is no escape, you cannot simply drive away and escape, surrounded on three sides by Gadaffi troops, and the sea on the fourth side. It was one of these rockets that had hit the Shaba family home. A distant boom and smoke cloud as dusk fell the night before.

Across town in the second hospital, as I walked into the ward room it was the sound of Faraz and Ibrahim’s youngest brother that drew my attention, 2 days old and lying in his grandmother’s arms and making new born squeals and lifting his arms and legs.

On the other side of the room his mother lay, burnt head to toe and wrapped in bandages, only her face and toes exposed charred and raw. She had probably been standing in the kitchen when the rocket hit and a fireball engulfed her after killing Ibrahim a second beforehand. I remember standing in her kitchen only an hour ago, everything black, mangled metal plates half melted and a pool of aluminum on the floor that had melted in the firestorm. 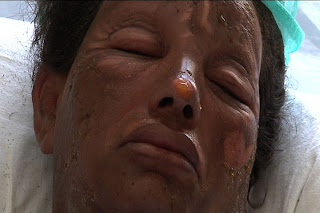 She cannot open her eyes due to the burns and swelling.

In a whisper barely audible thru cracked and burnt lips, she says

“God will take care of the people responsible”

It is hard not to want to show the close up because, the impact of the horrors of war are not some computer game whereby if you die you get another life, when you are hit the impact is forever and all that matters in life is shattered.

I walk out and back to the car, it has been a tough morning and more rockets fall that afternoon, from the roof I wonder if another families life has been destroyed.

I send the edited story back to Washington, and at the end I include extra video of wide shots of the hospital rooms in case the close-ups are too graphic they can decide, for at the frontlines of a war zone, you find yourself with a different acceptance of what war is really like. Close ups of faces and eyes show the doorway to the soul and without seeing into the soul you cannot feel the pain of innocent victims.