Back in ’09, I went on a great adventure. A great Idol Adventure. It had all the elements of a classic legend, and was the first step in celebrity journalist Alfonzo Beta‘s rise to fame. 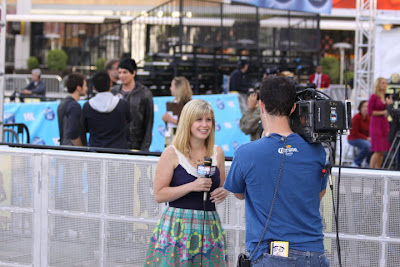 Two years later, I’ve just returned from my second bout with with the media beast known as the American Idol Finale. Broken, beaten and sleep-deprived, I can once again declare victory in an epic battle of too much to do, not enough time, and constant declarations of “why the hell doesn’t this piece of junk work”.

The only difference? This time around I was a seasoned veteran and knew the battlefield all too well. That, and I was acting as a satellite truck operator rather than a photog… which basically means I get to have all the fun and dump the deadlines on the shoulders of others. That’s not to say I wasn’t pulling my hair out with worry and frustration… just that it could have been worse if I had to do everything myself.

So rather than attack the situation with a video camera and a mic, as is my usual style, I grabbed Lil Snappy (my personal camera) and shot some photos for a website gallery. Now still photography is a whole different game that I have little experience in, but it turned out to be an exciting adventure none-the-less. And when you’ve got some big time stars walking down a red carpet, it makes for a fun afternoon. Here are some hilights: 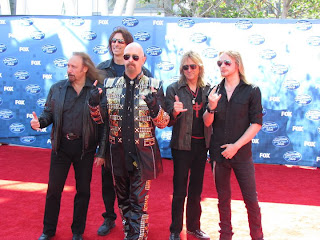 From across the red carpet, I saw an old bald man’s head bobbing around in the crowd. Jokingly, I said to my coworkers “That looks like f’ing Rob Halford over there”, thinking he was a bodyguard or something. No one knew who I was talking about, but as he got closer I noticed a strange glimmer coming from his suit. Once he came into full view and I saw how ridiculous he looked, I knew it had to be the rock god himself. Of course I didn’t see much of the show this year and was unaware that 4th placer James Durbin sang some of their tunes. While they passed us by on the red carpet without offering an interview, I still thought it was pretty darn cool that they walked past me. Oh, and speaking of… 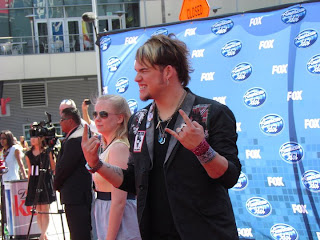 The third runner-up (by my math) stopped by for a quick shout-out to Sactown. Again, I didn’t see much of this season, coming into it the week after he was voted off (watching for work purposes). I wasn’t too familiar with him, but my mom had mentioned that he was her favorite (she’s my contact when it comes to anything Idol). Turns out the guy’s got a hell of a rock voice, showing up Old Man Halford as they performed together on the finale show. I’m curious to see what this kid can do with himself now that the show’s over. Oh… and of course I was sure get a quick message for his #1 fan… 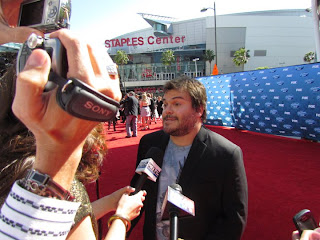 I think this was the big surprise of the day for me… I saw a short pudgy guy getting out of a limo, and I had to ask someone if that was who it looked like. Why would he be here? I only expected to see Idols and perhaps a few musicians. Turns out he was one of the “surprise musical guests” in the show. We were fortunate enough to be placed right after the photo section of the red carpet, so we were able to shout and get his attention before he really knew what was going on. That turned into a quick interview before he made a dash for the front doors, leaving all the other local media stations in the dust. Score! 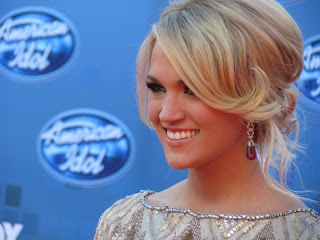 Easily the most successful of the Idol alumni, Carrie shot past all the small media outlets, including ours, as she made her way in… but I figured she deserved an honorable mention. I gotta say, you can’t take a bad picture of this woman! Everyone that passed by provided several throw-away photos as I snapped away like a madman looking for something usable… but not her. Every one of the photos was perfect. Incredible. And that’s all I have to say about that. 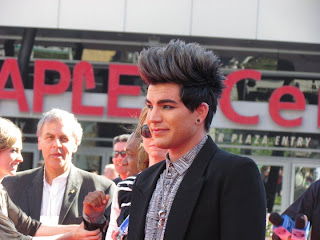 2009’s runner-up made a flashy entrance, proving that he’s grown into a star since he lost the title two years ago. I’m glad to see that he’s made something of himself, as he was such a grateful kid when we chatted the day after his loss (and he signed Alfonzo Beta‘s head:) 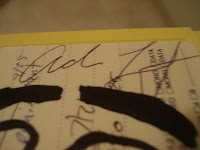 Nice guy, even if he did pass right by us without a word (like he didn’t remember!)… but in his defence, it was minutes before the show started. Let this be a lesson Adam: Show up on time next year so that you can talk to the lowly Media Elite. 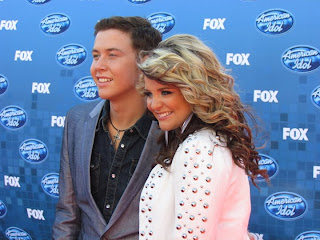 Of course the royal couple had to be mentioned… finalists Scotty McCreery and Lauren Alaina, who provided the final competition with a whole lotta country. They didn’t say much as they made their way in moments before the show, but we were able to grab Scotty for a quick second to confirm that he does in fact look a lot like local reporter Chris Biele. 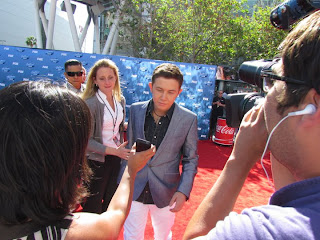 ﻿Working the red carpet was quite an adventure, but there’s plenty more to tell. In the coming days, we’ll take you inside the press room for some more wacky celebrity sightings, and we’ll examine some of the big names that were lucky enough to be seen partying with entertainment reporter Alfonzo.