Here We Stay… There They Go?

Wednesday night, the Lakers were in town to play the Sacramento Kings. But this wasn’t just any old NBA game… this could very well be the last game ever for the Sacramento Kings. Despite the noble efforts of fans, including the groups Here We Stay, Here We Build and Here We Sit (I really wanted to write “Here We Piss” over a urinal at the arena…), it appears as if the Kings are outta here. Of course I wasn’t about to miss out on this monumental moment in Sactown history (or the chance to be on tv…) so I headed down to Arco Arena (I mean Power Balance Pavilion… yeah, I know…) to get a front row seat for the action. 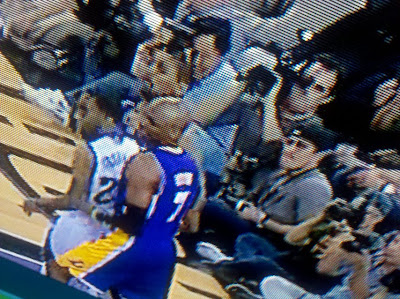 But before the game started, the real action began. As we were setting up our live shot for the evening news on the court, Kobe arrived (hours before the game) to do some warm-ups (Note: Ron Artest arrived maybe 45 minutes before the game). Guess that’s why they pay him the big bucks, right? 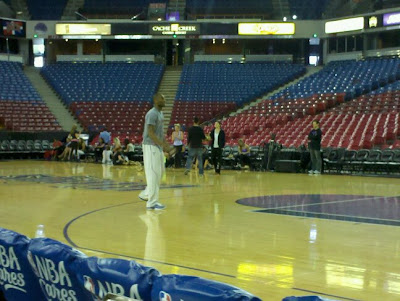 Now, mind you, I’m not used to seeing big-time celebrities around this place, so I was sure to snap a picture of the guy. But don’t be mistaken, I’m no Lakers fan (and to be fair, I don’t much follow the NBA (Maybe if we had a better team in town I would! (sorry, that was inappropriate))), but the guy’s a big deal, and I had to keep my Facebook street cred up with the other photogs. He seemed cool with the picture snapping, as everyone else in the pre-game arena was doing the same thing.

After warming up, I noticed one of my photog bretheren was sitting only feet from the guy. Figuring he might get a kick out of having a few shots of him sitting next to Mr. Bryant, I started rolling. Seemed reasonable, but ol’ Ko-Ko disagreed…

It was weird… as soon as he started yelling at me (I suppose I use the term “yelling” loosely…) my finger hit the record button to stop the camera. It wasn’t that I was scared, it was more out of shock that he acknowledged my existence. The entire time, he ignored the cameras and fans as he warmed up, so as I was shooting him, it was more like watching him on TV. When he suddenly looked up and told me to knock it off… it was like having a tiger at the zoo glare at you and say, “move along, ya jackass!” Totally unexpected. Clearly, I’d never make it as a TMZ cameraman (and to be honest, I don’t see that as a bad thing).

Once our sports guy arrived, he filled me in on Kobe’s recent events in the media… which is probably what he was talking to those guys about (he was fined that same day). Whoops. 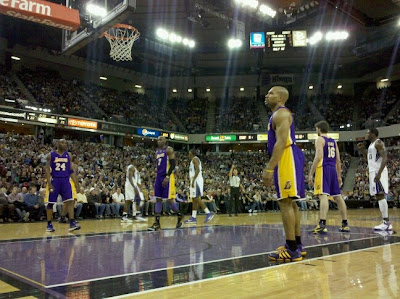 In the end, the Kings lost in overtime and Kobe didn’t beat me up. Will they stay or will they go? It’s still up in the air (as of press time). But if nothing else comes from this night, at least I can claim that I had an “exclusive 1-on-1 interview with Kobe Bryant.”