Can’t say I’ve ever really been a fan of eating food outta the back of a truck. Editing news stories outta the back of a truck is one thing… but something just seemed unsettling about the whole thing. Is this a fair bias? Probably not, but after today I will say that my mind has been forever changed… for as I pulled into work this morning, what should I see but this grand orange beheamoth offering nothing but items from my favorite food group: the grilled cheese!! 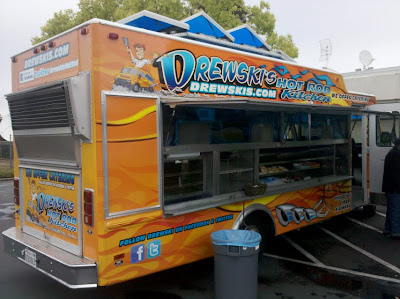 Skidding to a stop, I jumeped out of my vehicle and dashed over to this glorious contraption, hopping back and fourth from foot to foot as I waited for the morning show to finish their live hits with the cooks. I could barely contain my excitement as they offered up several different gormet takes on the classic, including a grilled brie, apple and walnut sandwich and a grilled s’mores sandwich. Wash it down with some sweet potato fries and you’re ready to start your work day! Oh, this was shaping up to be a quality day of journalism.

So I wander into the station and inquire about the day’s stories… only to find that I’m gonna be making my way down to the State Capitol to interview some guy… I think his name is Guy. Actually I’m a fan of his work, including such shows as Diners, Drive-Ins and Dives and the carnival sideshow Minute to Win It. Stuffed to the brim with various grilled sandwiches, I grabbed my reporter and we headed down to lawmakers’ land.

So yeah, Guy Fieri was there with some government folk to make some sort of resolution that parents should cook with their kids. They went as far as to delcare it “Cook With Your Kids Day,” hoping that parents will teach their kids the importance of eating healthy food. Like perhaps a grilled cheese with apples and walnuts? 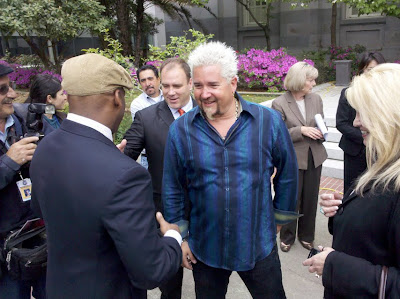 Following a little to-do about the resolution, we swooped in so I could get a few questions with the Guy himself. Which is to say, I asked Guy Fieri where I should go to lunch. I thought that was kinda funny, although he probably gets it from everybody. After listing his own two restaurants, he said Jamie’s is the best in town. I didn’t take him up on it, as the s’mores grilled sandwich was starting to give me indegestion, but the advice was apprecited. He also paused for a quick picture with my reporter: 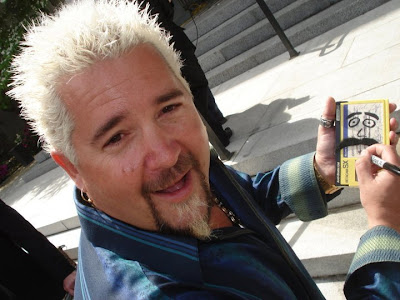 I always wondered what Guy would be like in person, as his tv persona makes him seem like he might be kinda douchy (although it may just be the hair and backwards sunglasses). But he turned out to be a really cool guy, who seemed totally happy to take a few minutes for a one-on-one interview (and that’s not usually the case with recognizable personalities). He said he was trying to use is brief time in the spotlight to do something good, which is what this Cook with Your Kids was all about. I’m usually quick to disapprove of people, especially if they’re more famous than me (which, to be fair, is most everybody), but Guy seemed like a genuinely nice guy (and he was amused by the whole Alfonzo bit), which earns him the coveted Photocalypse Seal of Approval. 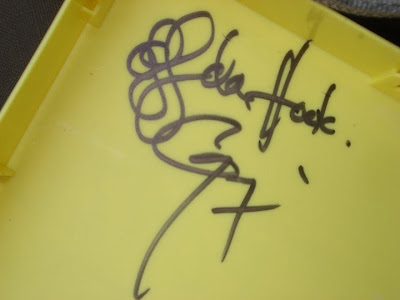