It has been quite a year, so where do I begin. I suppose I should start with an explanation as to my prolonged absence from adding to this blog.
I had every intention of taking you, the reader, through my Olympic experience as I covered the 2010 Winter Olympic Games from high above Vancouver aboard Chopper 9. Issues outside of my professional life, have, without divulging details, conspired against my motivation to write. I am hoping that I will overcome this as I do miss telling stories on this medium.

So how do I start again? It starts with a first sentence and paragraph, so please allow me to begin to tell you of my experiences during the most turbulent, yet rewarding and adventuresome assignment of my career, The Road to Vancouver 2010 and the 2010 Winter Olympic Games.

I was part of a massive CTV Crew that was sent to Victoria to begin coverage of the arrival of the Olympic Flame on Canadian soil. My particular assignment was at the CFB Victoria, where the aircraft carrying the delegation of VANOC, Government and Canadian Olympic Committee members as well as a special lamp in which a flame burned ever so small, yet ever so powerful. That little orange glow had been ignited on the slopes of Mount Olympus in an ancient Greek Ceremony, had now, with the watchful eyes of a team of Aboriginal Flame Guardians, about to ignite a nation.
It was my privilege to witness and experience it. The Torch Relay which meandered through out this country will forever be one of the highlights of my television career. 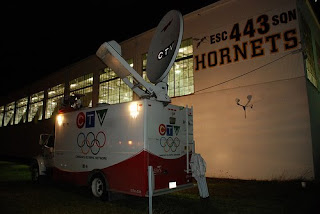 That first day of the Torch Relay certainly had its moments. It began for me and my crew at 1 am. We were the location crew for CTV Canada AM. Man their crew calls are early. We set up camera positions and ran our lines to several positions so the network would not miss a beat.
Sarah G was our location reporter and would do a number of “prep” scene setter hits to tease and engage the audience to Stay with CTV for every minute of coverage as we begin this final stage leading to Vancouver 2010. 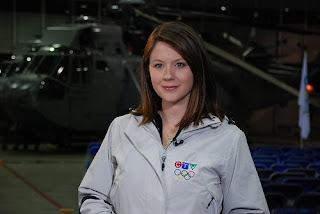 CTV Reporter Sarah Galashan as she readies for her hit into Canada AM
Word would come via Vanoc people, that the plane was delayed. This I am sure would cause certain stroke like symptoms for those further up the CTV Programming chain of command. I had learned a very long time ago not to worry about such things, that I should only concern myself with my camera position and making sure that my part of the greater picture is the best it possibly can be.
There was much gnashing of teeth with our field producer Jeff. No doubt, some of those stroke symptoms were beginning to manifest themselves to poor ol’ Jeff. Finally the plane landed and the excitement and anticipation of what was to be an historic day was very measurable with the crowd that had come to the Hangar. 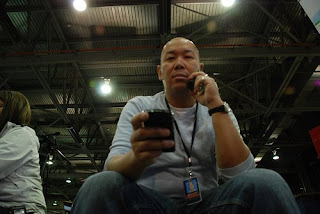 CTV Canada AM Field Producer Jeff Tam go “Black-tical” as we await the landing
But the wait continued. After what seemed like an eternity , the door of the aircraft opens and the deligation with its flaming cargo emerges. Things will happen very quickly now. The “Flame” is being carried by a specially designed miner’s lamp, makes it’s way to a podium inside the hangar where a short ceremony ensued. Then all at once it was over and onto Day 1 of the 2010 Olympic Torch Relay.
After a quick debrief into the show, with National Affairs Correspondant Lisa LaFlamme, who travelled with the “Fire” from Greece, my Live duties were over and now a quick strike and reposition to our down town Victoria position for supper hour broadcasts into the Network and our Local, but that would come some 7 hours later. Our crew took a couple of hours to get some shut eye until our next Crew Call at 2PM.
My duties now would center on editing on a new HD disc to disc editing system that had never been used in actual field conditions. The fun was about to begin, and when I say fun, I really mean the stuff that hits a fan. I feel a repeat of the edit caos that defined my Torino Olympic experience. With the eyes of our network firmly on us , we would need to bring our A game. It would be a challange that would relish and it would make the beginning of the final leg of the Journey that would make or break us as a team, as we covered the biggest event in our Station’s , dare I say the Network’s history.
I will have more to come, in the days and weeks ahead.