At all bases the Marines operate in there is an expression they use “River City” to describe what happens when a Marine is killed or injured. All contact with the outside world ceases to be available all phone lines and Internet connections are cut until the next of kin are notified.

At Forward Operating Base Now Zad, it is almost the norm, rather than the exception. Life continues for the Marines, another day passes and it is one day closer to going home. The majority of the Marines I talked with “going home,” meant safe and still intact, whilst they all grieve for fallen comrades there is also an acceptance that what they do entails risk.

Whilst they may be Rambo one minute, the next minute reflection replaces reality. When we arrived at Now Zad, 2/3 Marines Golf Company had already lost 2 Marines and a further 7 had been wounded in action, including 3 double amputations. All had been killed or injured as a result of IED’s. Any foot patrol was forbidden as the risk was to high to quote Captain Martin of Golf Company, “We will not walk in the area”. 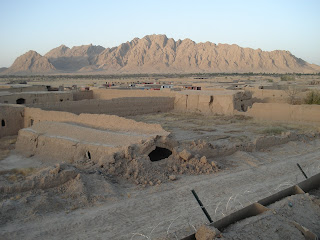 Now Zad is a ghost town, not a soul lives there, or has done for the past couple of years, where once approx 15,000 Afghans once lived, not a soul is there. The British and Estonians have held ground there and the Marines are now on their third rotation there. With a casual ease Marines would point to a spot 100 yards away and say there is a high possibility that the Taliban are there now and watching us. What separates the two is often just a minefield of IED’s. They are so randomly set and spread out that even the Taliban to a degree now will not enter certain areas.

And so in temperatures that destroy any remaining part of your soul, a stand off exists in Now Zad. As if it was the 1st World War, a no mans land of death separates the adversaries. The only thing that moves between the two sides apart from bullets, mortars and rockets are the wasps. For some reason Now Zad has a plague of them. Any water or liquid and you are surrounded by them, and for someone like me who has a certified terror of bee’s let alone wasps, this was no happy place.

Showers and the basic laundry facility was closed between 11am and 2 pm, not to conserve water but to minimize wasp attacks. Hesco barriers and concrete walls may stop Taliban attacks but not wasps.

Unlike large bases back at Leatherneck and Bastion or even in the capital Kabul, FOB Now Zad has no luxuries, most rooms are plywood boxes with no air conditioning, and the temperature inside the rooms can easily reach 42 degrees Celsius close to 108 degrees Fahrenheit. There is no dining facilty for meals apart from some netting on poles, two meals a day are served out of trays, miss the meal time and it is MRE’s. I saw the trays of food just lying around in the dust like discarded waste next to a dumpster, no doubt tomorrows meal.

Water is measured in degrees of bath water, and tepid is something you actually crave. There were fridges around, but they were closely guarded secrets and rarely if ever would anyone ever offer Greg and I a cold drink, they were just too precious, I did not begrudge them this as it made me realize how hard it actually is for them. And how pathetically easy Soldiers, Sailors, Marines and Airmen have it at the bigger bases, where 24 hour meals are available and signs on the fridges ask you to limit yourself to two cold cans of soda a meal, but no one ever counts. 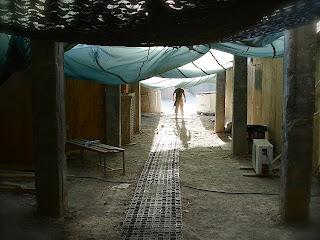 And yet not one Marine at FOB Now Zad wanted to be anywhere else but there, at the frontline in the fight against the Taliban. In adversity they become a true “Band of Brothers”, and to be honest you never hear a word of despair or frustration from them.

The only thing they do not like is “River City” because it means one of there own has fallen.