Everyone has to be diplomatic whenever they raise the issue of the ANA (Afghanistan’s National Army). To quote correspondent Greg Palkot “ they are a work in progress ”.

Military leaders whenever asked about how the ANA perform seem to come up with metaphors that make this rag tag collection of “now you see them now you don’t weekend warriors” to be the 300 Spartans ready to take on the global struggle of counter terrorism single handed.

Even Company Commanders have to publicly praise their performance with gritted teeth, as it is the politically correct thing to do. When in doubt anyone tries to draw comparisons between Afghanistan and Iraq, the trouble is that this is a ridiculous contrast that even a 5th grader can understand.

Afghanistan has population of around 32 million people is 50 percent larger than Iraq, and has a combined Military and Police force of approx 220,000. Iraq; smaller population 28 million, yet it has now close to 600,000 troops in its various branches of service. In 2007 Iraq’s own Security Forces grew by a staggering 100,000 members in one year, this is why the “Surge” was so successful.

After nearly 8 years, Afghanistan’s Military is believed to have over 130,000 members according to various reports, but you would have to be an eternal optimist to actually believe this number is accurate. For no one wants to offend or rock the sensitive political correct types, who are trying to talk up the success of a continuing failing project, which has cost billions of dollars, and every six months or so a new plan is drawn up at a substantial cost to try and solve the issue.

If a basic drug test was done on the members of the ANA, it is estimated that 85% would fail straight up.

On the recent US Marine Operation, in Dahaneh in Helmand I had the opportunity to observe the ANA again in operation. Marines would literally be screaming at them to stop aiming there weapons at US forces. They were considered so completely ineffective that when the Marines were setting up defensive positions, the ANA were completely ignored, as they could not be trusted to obey simple instructions.

One key objective was a search compound by compound of the village to rout out any Taliban; the mission had the ANA taking the lead and entering the compounds so as to put an Afghan face to the operation. There own main objective was to enter a compound find any available shady spot, sit down and relax. Whilst US Marines stood in the heat and sun protecting them, time and time again after a few minutes we would enter the compounds and find them lazing around with absolutely no interest in the mission. After a few hours the Marine Lt. in charge of the squad gave up on them and had his own troops do the searches. The only thing the ANA wanted to do was go back to the base, as they were “too tired”.

The ANA members on this mission had absolutely zero apparent interest in being they’re trying to win the hearts and minds of their own people.

When in the heat of the Compound Objective, I only managed to get two reasonable shots of the ANA in action, the first was they trying to kick a door to a compound in, and the door did not budge. 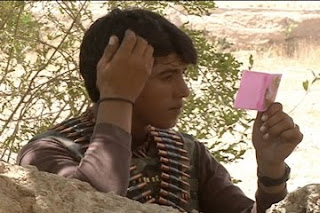 The second was of a kid soldier barely looking sixteen years old who somehow was a member of the ANA, we nicknamed him Rambo, because like many here, they like to strap ammunition around themselves in a bandoleer fashion from a spaghetti western. As he took up a watch position with a gun as big as himself, without the slightest care in the world or concern for the bullets coming from the Taliban in the mountains above, he took out a small pink plastic mirror and for the next two minutes preened and checked his hair. Not once did he look around the battlefield, his hair was far more important.

It is easy to be cynical and there is no doubt that some elements of the Afghanistan Army are trying, but from what I have seen and heard they are truly a work in progress and the timeline for there success is not promising.