It was the flies that woke me up before dawn, lying on the floor of a filthy piece of carpet covered in dirt and broken glass. These were not the type of normal domestic flies, but the ones that seemed intent on landing on the corners of your eyes or the edge of your mouth.

The day had not even begun and the filth of deprivation had begun.

You become so exhausted that any gunfire outgoing from the roof of the compound does raise anymore of a thought than I must film some more of that later.

There is no cup of coffee, no breakfast and for a toilet, go and relieve yourself on that old car tire in the corner of the compound. The concept of even changing clothes is not on the cards, I had bought on extra t-shirt and a pair of trousers but decided to save them, as there had been no talk at all about when we would be able to get out, as this was only the morning of day 2 of the Operation. So I wanted to save them for a future day.

Perhaps if there was one luxury I could point too, was that there was a well. Yep a plain old fashioned, been around for two thousand years type of well, hole in the ground, bucket on a pulley, lower it and lift it and you have water.

Water that was actually cool and you could wash in, as for drinking it. Well no one tried, as there was only one WAG room and hundreds of Marines.

Morning is often a time for reflection; everyone after the adrenaline of yesterday’s firefight was flat. Those who could not claim that had a shot a Taliban were jealous of those who had, and those who had been on the trigger on the roof knew that they had shot a lot of rounds into mud brick walls but would not admit it.

The greatest damage to the Taliban the previous day had come from the sky, via a large J Dam bomb. One enormous explosion but given the situation in the village no one had been out to try and assess the number of Taliban that had actually been killed. Even when they did get out no traces of bodies were ever found or reported on, numbers were always so vague and variable that I did not bother to write down them. The estimated claim for the first day had been according to Operations Commander Captain Zachary Martin had been “at least a dozen Taliban have been killed”.

Logic would have it that any operation in the heat, given that it would rise into the high 120’s within hours, should logically take place earl in the morning or later in the afternoon. But enter the ANA (Afghan National Army) of which I wrote about in the entry “Rambo’s Pink Mirror”. The ANA would not be able to get ready before 11:30am and thus the mission to search every compound in the village would take place during the hottest period of the day.

The Marines privately would not hold back in their stinging criticism’s and complaints about the performance of this ANA unit, turn a camera on and ask a question and it was as if they discussing a completely different army.

This mission was dangerous by any definition, apart from the threat of having your legs blown off by an IED or shot from the hills around the village as you tried to run across fields between compounds. A third threat was that we would be going out and trying to get the ANA to enter the compounds and conduct the searches for the Taliban.

To win the hearts and minds of the residents of Dahaneh, well those who had remained after the first day, during which they had been bombed, strafed from Apache helicopters, had more ammunition fired within their homes than in history.

It was considered politically correct for the ANA to enter and search the Compounds, putting an “Afghan Face” on the operation, whilst the US Marines would provide security outside.

The Marines were ready to start at 11:30 and standing in the sun slowly cooking inside our body armor and Kevlar helmets, we waited and waited for the ANA to get ready. They had no desire to leave the shade and start anything. 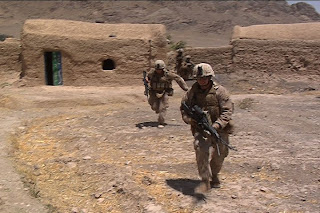 The operation was divided into 2 patrols, and Greg and I were with the second patrol. As the first team left they were greeted with gunfire and from behind the walls of the compound it was not a nice sound to hear.

Finally after getting the half a dozen ANA assigned to our patrol to get into formation we too walked out and made for the first compound. As the gunfire began around us, you just kept low and kept moving searching for a wall to provide shelter. The Marines maintained tight formation, the ANA for their part did not have a clue and it was not unusual to hear a Marine screaming at an ANA soldier to stop pointing his weapon at a Marine. The wording of these pleas soon descended into out and out swearing, which mattered little to the rag tag fighters. 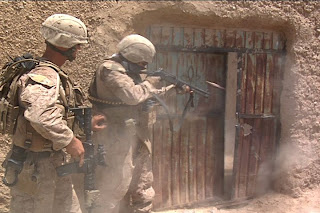 The Marines would kick or blow in a door and stand back; the ANA would then enter and find the first piece of shade and somewhere to sit down. We would wait a few minutes them in frustration enter and try to get them to search. It was repeated time after time.

The heat was now at its zenith and every movement was becoming soul destroying. Each run across the open drained me to the point of exhaustion. After one sprint the Marine medic with us dropped to the ground and vomited everything in his stomach up, losing any precious liquid in his body.

Two hours into the search and I was finished, my body was just closing down in the heat. I had stopped sweating and my skin was dry, I had trouble even focusing my eyes and leaning against a wall, I realized that heatstroke was rapidly overcoming me.
I had the video and material we needed and after the patrol returned to the sanctuary of the compound I collapsed. Removing my body armor my t-shirt crusted in sweat and salt I knew that to go back out would have only endangered my own life and potentially those of the Marines if I collapsed.

Drinking water hot enough to make coffee in, is no cure and I dropped for half an hour,

The patrol went back out for a few more hours, and the ANA became so ineffective that the Marines took on all responsibilities including searches.

We spent the remainder of the afternoon on the roof watching attempts to bomb the hills were the Taliban had positions, editing material and doing a live shot from the compound.

The mission “Operation Eastern Resolve 2” had perhaps accomplished its goal to drive the Taliban out of the village, but it seemed that little had been achieved. And if anything it was becoming bogged down. Observing the Captain and XO of Golf Company locked in a conversation it was apparent that even the Generals back at the Marines HQ at Camp Leatherneck were questioning just what had been achieved in two days of fighting given the new directives of how to fight this war.

We heard word that a convoy was going back to FOB Now Zad that night and that it could be the last one for three day, given we had to get back to Kabul for the Elections. We made the decision to leave Dahaneh; the kinetic fighting was all but over.

Lying on a steel grate for a bed and a water bottle for a pillow, I looked up at an amazing sky of stars and thought long and hard about the previous two days. There were few positive thoughts that evening.

I never question the attitude of the fighting Marine, for they are each and everyone of them are heroes fighting as they are directed.

The problem is that this war, after eight years has if anything gotten worse and to which a solution seems further away. And those in charge truly have no clear cohesive strategy to bring it to an end, all we have to look forward too in the coming months and years, are more reports of young brave men being injured and dying.