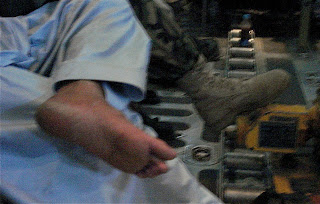 There is a strong push now to involve the Afghanistan National Army (ANA) in the frontline in the war against the Taliban, and yesterday we Correspondent Greg Palkot and I were flying down to Kandahar, where the ANA was to add to the forces down there.

I add that we were flying down there, because as we were in the air there was according to the loadmaster in the plane a “sustained rocket attack” on Kandahar Airport. In the back there was confusion as the flight dragged on, what was supposed to be an hour and change flight was getting up to two hours. Being strapped into the webbing seats with no window for reference the only sense that we were circling Kandahar was that every ten minutes the sun would beam through the port hole above us.

Finally the word was passed around that we were flying to Bagram Air Base. North of Kabul as the weather in Kabul had deteriorated to the extent that even a Air Force C130 could not land. Landing in Bagram presented another problem, as it is a secure US Military base and the Afghans are not permitted on the base without major security clearances.

An hour later we took off and headed back to Kabul as the winds had dropped. And the ANA who took off in the morning expecting to be deployed out of Kandahar in the South found themselves back in Kabul.

Our adventures were to take on another level.

The initial impression of the ANA deployment is more confusing than logical. Only a third of them had any sort of uniform, the rest dressed in traditional Sharwa kamisa’s and sandals. Looking down the plane it was the image of an army boot and bare feet, that will remain with me.

There were some classic moments in the hours that we spent together, like the fact that a few of the Afghans thought it would be good to get up and standing on the web seats try and look out of the portholes as we actually landed.

Then of course there is the issue of everyone sitting on the plane drinking water to avoid dehydration for a couple of hours. Human nature takes course and on a C130 the toilet facility can only be described as “primitive”. Standing on a platform, wearing body armor and trying to aim into a sucking sinkhole is not easy. 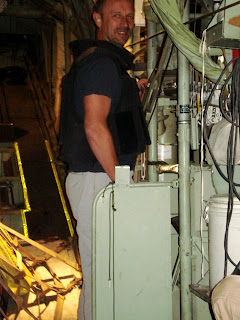 The first Afghan to come back was more shocked than anything else as the polite way here is to squat with modesty, not standing behind a screen with fifty plus people watching you.
By the time we had landed at Bagram, there were many crossed legs, and there was a polite but urgent trot to the edge of the flight line, where in accordance with modest tradition. Nature could be attended to, even strict security and guidelines can be transgressed the male to male knowledge that when a man has to go, he has to go.

In Afghanistan it is no different.

Update – we were meant to get a flight down South to Helmand this morning and billeted overnight in the Transit barracks. Kabul then experienced its first serious rocket/mortar attack in the lead up to the Elections, with 8 rockets landing in the city close to the airport. Result airport closes, after getting up at 5am, we were only to have our flight cancelled as we walked down the terminal stairs to the plane. Next plane 11:40pm, only a 14 hour wait, and given our penchance for attracting rockets in the last twenty four hours, lets see what the gremlins of the air have for us.