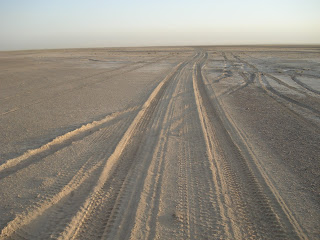 Getting to the Frontline in Afghanistan is not easy; you take what ever you can, whenever you can. Competition amongst all Media agencies whether TV, Print, Stills or Radio is intense. We all want to get there before the others and get the preverbial scoop.

Sitting in the tent at Camp Leatherneck in Helmand Province, South Afghanistan, Correspondent Greg Palkot and I where grouped with 3 members of Associated Press and Radio Reporter from NPR. We had already waited at Kabul Airport for 37 hours trying to get ahead of the rest of the pack only to have had two flights cancelled and had become known as the “Kabul Two” for being stranded there and waiting.

To get forward the usual method is by helicopter, inevitably at some insane hour of the morning like 2am, and without doubt we are generally classified as “Space A” passengers. Meaning that if Space is Available you can get a seat on the bird, if not you are bumped to the next flight, which can be 24 hours later or more.

To get to our FOB (Forward Operating Base) at Now Zad, in Northern Helmand we were told that we might have chance in the next 36 hours, but as we saw other media going to other areas returning to the tent we shared at Camp Leather neck coming back after being bounced time and time again. Greg had an idea, if you cannot fly then what about driving up in a Convoy, the FOB is only sixty miles North of Leatherneck.

Without letting on we managed to find a Supply Convoy heading out that Afternoon (August 6th 2009), a forty one-vehicle log train driving through the “Desert of Death” as the Helmand Desert is called for being one of the most inhospitable places on the planet, carrying everything from ammunition to food and water. It would stretch over 2 km’s long.

It should take no longer than 8 hours was the word from the PAO (Public Affairs Officer) organizing logistics. That’s do able, I agreed with Greg, anything beats sitting around and waiting. And we could also do a story on the Convoy itself.

Cutting the number of bags we were traveling with to seven (Five equipment and Two personal) we were taken to the Convoy staging area and introduced to the guys who were to become relatively close friends in the confines of the MRAP we were to travel in.

They simply laughed when I asked about the 8 hour drive, “Man the record for this trip is 17 hours, the longest trip 53 hours” replied the Sarge. Something you should know is that we expect to get hit by IED bombs, we have done this convoy four times and only once have we not been hit. “Welcome to the most dangerous trip you can do in the world”. Seatbelts not required but you must wear your body armor at all times, these vehicles are designed to withstand IED blasts but we hoped not to test the theory”.

The Chaplain for the HQ, came and lead the prayers for all traveling, and we loaded up closed the thick armored door behind us, together with 131 Marines we began the trip.

There would be no road traveled we where to make our own new road across the Desert to avoid IED’s as is the normal practice here now. A bulldozer scrapes a path and everyone stays in tracks ahead of them.

“Old Man” finally touched the gas pedal at 3:40pm, it took forty minutes to actually get out of the Base and past the final strand of Razor Wire less than a mile and the sixty to go did not start till the gate.

We approached the main East West Highway and the only two hundred yards of road we would be on. It was considered safe as the Base had “eyes” on this stretch. Greg and I had actually driven on this road back in May 2001, when the Taliban were in power, we had simply hired a couple of taxi’s and driven from Heart to Kandahar, with no security or for that matter concerns about safety.

Before the second hour was up we stopped, not for an IED but simply a vehicle had broken down, not one but three trucks were in trouble. Thirty minutes later we rolled forward 50 meters and stopped again a fourth vehicle now had a problem, then a fifth. 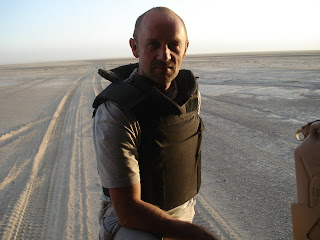 As the last light faded, we had covered less than 300m in two hours. I started to question our decision to convoy and began to plot just how long this could take, had we made a bad choice.

5 hours after leaving the Base and we could still see the lights clearly, things were not going well and there was no turning back, only the tracks of the vehicle ahead in the sand.

Just before Midnight the convoy halted to refuel, the convoy travels with its own gas tanker. And the lights of the Base were still on the horizon, nearly eight hours after leaving

There is only so much room and so many positions you can try to get comfortable in, imaging two economy class seats facing each other with even less legroom than a cheap charter plane crams in, and that is your world, your body armor plates dig into your back making sleep near impossible, two minutes here five minutes there, the next bump wakes you as we tumble into each other. At times it became a Pilates Stretching class as you try to find that extra inch to stretch out a cramping muscle.

Lance Corporal Lustre, 19 from California, joined the Marines not because of 9/11 he vaguely remembers being at school and watching the aftermath on TV in the hall, but because he wanted to “Make a difference”. President Reagan once commented, “Some people spend an entire lifetime wondering if they had made a difference, Marines don’t have that problem”. And that’s why he joined, his Girlfriend and Parents are not excited about him being here in Afghanistan, however was he excited about being here, he answered “Yes”.

We were yet to enter what the Marines called “Hell Pass” and the beginning of Taliban controlled territory, over the radio you could hear muffled messages from the Intelligence guys warning of trouble looming.

Twelve hours into the trip, we had stopped asking how far or how much further, first light was coming, we had not eaten since Lunch the day before, it is too hard to digest when every 15 seconds or so you go over another bone jolting bump. Conversations in the vehicle became less and less, exhaustion was setting in. Boredom a fact of life as was my body armor chaffing my skin red.

We had requested to move up in the convoy after dawn as there is only so much video you can shoot from the back. And after 16 hours we bade farewell to the guys and moved into “Vic 2” the second vehicle after the clearance team in the convoy.

I could now stand up through the exit hatch at the back and see why we had taken so long to get such little distance. We were know approaching the most feared part of the trip for the convoy the “Wadi Zone”. Dried river and creek beds where the Taliban favored planting IED’s the previous attacks had all taken part in this area.

The armored bulldozer with almost trepidation descended into the first of the Wadi’s plowing a road for us to follow. The theory being that if there is an IED then the front scoop will take the blast. I tried to imagine just what must being going through the drivers mind as you plow ahead and expect to hit a bomb, and then you think the person driving this suicide plough is probably only 19 years old and not yet legal to drink alcohol in States back home.

We crossed without incident and I expected that tension would ease up in the vehicle, but as the Sarge said we were still to cross “IED Wadi” the one we had traversed was simply a tributary of the one they all feared.

Before crossing two guys from Explosives Team swept by hand “IED Wadi” bed with metal detectors, an almost futile gesture now as the Taliban no longer use any metal parts in their homemade bombs to avoid detection. Once they gave the all clear the bulldozer again descended the bank and made a clear path.

Our destination was getting close but 4 more Wadi’s had to be cleared, 18 hours had passed and the lookouts were nervous, children carrying yellow plastic jugs were noted, shepherds with flocks of goats were potential Taliban lookouts. Anyone moving at more than a slow shuffle in the late morning heat haze was a suspect.

The final miles had become a struggle against exhaustion and nervous tension. Locked in a metal box the air conditioning battled the extremes of the approaching noonday sun. But at least we were moving closer by the hour.

We entered the safe confines of FOB Now Zad after twenty hours; given the delays at the start the mood of the Marines as we all climbed out was that of relief. For Greg and I we looked at each other and wondered just what planet we were on. Moon dust or “Afghan Snow” a fine powder was six inches deep and the temperature was in the 120’s degree Fahrenheit. We had beaten the competition up, and had a good story in the can as we say.

The other Press flew up that night; it took them 18 minutes in a helicopter to cover the same distance it had taken us twenty hours to travel.

When I next buy a lottery ticket, I am going to use the numbers of hours that were predicted, discussed and joked about how long it would take to cover the Desert of Death Convoy.