Well good God, will the snow never end??? Yes my friends, we here in Vancouver got walloped by winter these past weeks. You have to remember municipal authorities some years ago traded their snow removal equipment for some magic beans and a promise of tropical weather.

Let me tell you that snow of any accumulation makes for news here in these parts and these weeks weather and weather related phenomenon have been the top stories for the past 25 days.

I just wanted to survive the holidays. I only had a few days off and by the time Christmas eve rolled around I had had enough of being wet and miserable shooting the daily sausage.

But the weather would not let up. And I still had another two weeks before I would return to my beloved hangar and the skies over Vancouver.

The holidays bring out the masses to the ski hills. In those masses there is usually one or two folks that get themselves into some difficulty and they then require a search and a rescue. This year would be no different and with all of the heavy snow, the lure of the back country is just too great for some.
The heavy snow triggered avalanche warnings from one side of this great Province to the other.

The first weekend after Christmas, news of a massive slide with fatal results, dispatched many from our news room to a town near Fernie, BC. I was not on that crew and was grateful for having missed that one. A grief stricken town is not what any of us wanted over the Christmas break.

Nope I was back on the ground, filing the daily items that would fill up the show after the numerous items from Fernie.

Sending a number of staff out of town on such a story is a necessary thing. The by- product is however, fewer to look after the rest with an already holiday reduced roster. Somewhere in the system, someone has to pay the toll on the numbers game. This occasion, it was our Air Op’s that would ante up.
Leaving the the flying machine without a crew is risky. It’s a gamble. It can also bite you if you are not careful. That week, the weather was marginal, so the risk seemed acceptable.

My mornings would begin with a scan of the local radio news to get an idea of what was in store for me on that day. Weather, Fernie and what’s this? A missing snowboarder off of Mount Seymour.
Damn, I thought, this would be a good item from the air. Search aircraft, perhaps a rescue. More like a recovery, but you gotta keep positive.
I quickly remembered it was Pete’s week in the air. I later learned he had been reassigned to make up for the short fall back in Vancouver.
I really didn’t give the search much more thought. The weather was kinda low anyway for flight. I went about my business and shot some VSV and some streeters and interviews for a dreaded year ender that one of the reporters were putting together. By that time it was almost 2:30 and time for a break. I just happened to be sitting by the news desk when word of “Snow Boarder Found” came to us via our scanners. The fellow had been missing for more than 3 days and in my experience after 3 days usually means a corpse off of Suicide Gully, the place where the young man went missing.

“Murray! We need you to get to the helicopter now! They are going to long line the boarder off the mountain!”
I felt bad for a brief moment, knowing that this should be Pete’s gig, but he was already on his way up the side of that Mountain with a Live Truck and Gary, the other heli op, was way out east and too far away.
“He’s alive!” Lisa the acting assignment editor exclaimed.
Her words added urgency to my calls to our pilot.
The next thing I knew I was in the air and headed to the side of Mount Seymour with Guiv our trusty Talon Pilot. 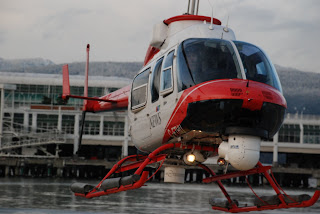 Guiv lands at the Harbour Helipad

He was in contact with Kelsey another Talon Pilot who was flying the rescue mission on this day.
Guiv tells me that the rescue is still about 20 minutes from happening and that Kelsy was just getting the long line attached to the helicopter at the Bone Creek works yard.
We arrived on the scene. Kelsy was just about to lift off and take a rescue tech and a spotter on the short flight to the rescue area.
I had my FLIR locked on his aircraft and tapes rolling in the machine. Wow this day sure took an interesting turn.
The weather had just cleared enough to allow a brief helicopter search. Tracks had been spotted and ground rescue techs from North Shore Search and Rescue, followed the tracks and found the young man seeking shelter under a tree. Cold and hungry, some say near the end of his endurance. If he had not been found, then surely he would not have lived to see the New Year.

Kelsy maneuvered his aircraft, and the tech attached to the long line, carefully down and into the trees and the small clearing where the ground team was located. After pin point delivery of a stretcher and the dangling rescue tech. Kelsy took an orbiting position nearby.

My FLIR watched as rescuers prepared the young man to his trip to hospital and to salvation from certain death of hypothermia.
Again Kelsy positioned the Talon Helicopter’s AStar into a hover over the scene, carefully lowering the line. Then all at once, with a signal from the ground tech secured to the long line, Kelsy pulled power into the collective and put the odd looking rescue machine into a climb, above the trees and began the short flight back to the Bone Yard and to awaiting ambulance.
As I zoomed in and followed the pair dangling from Kelsy’s long line, the lad in the stretcher looks right into my lens and smiles. He knows the danger is now over. He and his rescuers are delivered with precision to the awaiting medical team and transported to Vancouver General Hospital. 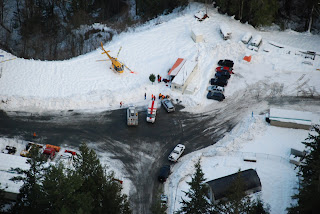 A shot out my window of the scene at the Bone Yard. The rescue had been so quick and busy on the FLIR, I did not have any chance to snap a few pics.

A happy ending for a week that had already claimed several young men near Fernie.
And that is how I spent my last flight of 2008, in the skies watching a rescue unfold. I wouldn’t have it any other way.